Skip to content
TexasCarnivals may earn a commission when you buy via the links on this site.

For many people, one of the most thrilling things about carnivals is that feeling you get when you see yourself plunging down toward the ground below or feeling like you are coming within inches of running into another ride, treebranch, or building or being spun around until the g-force begins to lift your feet from the ground and pin your body to the sides!

As exciting as it may be to feel like you are in danger, nobody in their right mind really wants anything to go wrong on a ride. In fact, the fear of something going wrong has stopped many people from fully enjoying the carnival experience. My advice to you, sit back – know and follow the safety warnings, and enjoy the ride.

This page is dedicated to telling stories of when things actually do go wrong.

Story #1: Oh no! The octopus has malfuncioned!

I was so excited! The guy I have had a crush on for months agreed to go to the carnival with me 🙂 Wow. An evening with my two favorite people (my daughter and my best friend) doing one of my favorite things (having a night of fun at the carnival!) 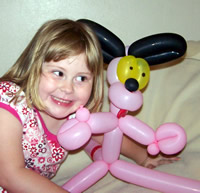 Things went great at first. We took Chey on the kiddy rides. Her little face lit up with excitement on all but one. We played a game and got some cotton candy and lemonade then watched the clown making a few balloons (including a cute little pink puppy for my daughter) and headed back to my mom’s so that she could watch my girl while us grownups had some fun.

When we got back I realized that my friend wasn’t as into the big fast rides as I was. Yay! The perfect opportunity for me to prove how big, tough, and brave I am. I reassured him that things rarely go wrong. The odds were definately in our favor (although, I could tell that the show we were at didn’t maintain their rides quite as well as the one I was more use to.)

We went on a couple of rides and things were pretty much ok. Although, I think that by the time we got off of the tilt-a-whirl, my guest was starting to regret drinking so much lemonade. Then we got on the octopus. I had checked it out earlier with my niece and expected it to be a fairly smooth (and somewhat dizzy) ride…

Hey! Guess what! I have always wondered what it would be like to be on a ride when it broke down and that night I got to find out. The ride was kinda rough and jerky compaired to what I had experienced two nights before. I knew that something wasn’t quite right, but what’s the point in acting scared? I just held on and enjoyed the ride while it lasted!

It ended with my friend and I in one of the highest positions up in the air. After a long wait the carnival workers were able to manouver the arms one at a time into a position where we could safely jump down.

For me, it was an enjoyable experience and confirmation that in general, even when something goes wrong, carnivals have workers available with the skill to help people get out unharmed.

Want to be listed as a featured show?